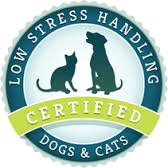 In 2015, I took the Low Stress Handling of Dogs & Cats course to become certified through Dr. Sophia Yin’s art & science of animal behavior. Low Stress Handling leads to safer and more satisfied staff, efficient workplaces, lowered liability, loyal clients, and, of course, happy animals. Certification coursework for each individual consists of 10 lecture/labs in a set order (20 coursework hours, online), followed by online multiple choice exams. Lecture and lab topics cover recognizing and reversing fear and aggression, the science of animal learning and practical applications, techniques for handling difficult dogs and cats in a low stress manner, and preparing the patient and setting up the hospital to create a relaxing environment. This is an aggressive course in asking the participant to not only be aware of the material, but to truly master it for the quizzes and tests provided. However, I truly believe that anyone invested in making a different in the lives of this number of animals can benefit from the material that it covers.
One of the most beneficial topics I learned was how to recognize fear and stress.  Fearful body language in dogs includes tense muscles, cowering, head turned away, gaze averted, ears back, and tail low or tucked.  Some other signals that could also be confused for other issues include panting, licking lips, yawning, inappetence, and inappropriate urination or defecation. 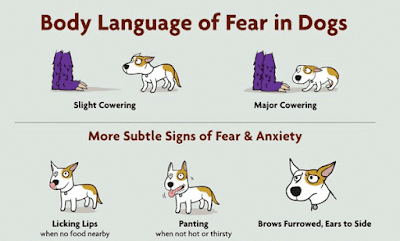 In seeing lots of dogs in exam rooms and in the treatment area, this is something that you would think comes naturally, but some of these signs can easily be confused for other behaviors. Also, how people interact with dogs can make it worse. When we approach the dog by looming over them or sticking our hands in their face, we often look scary and can trigger that fearful experience. Instead, we should stay out of their space and avoid direct staring.

It is best to go slowly, speak softly, avoid quick movements, and allow the animal approach on their own to make the first contact. If we do need to approach, facing backward or sideways is better than head-on, and sitting is better than leaning over.
The course if full of amazing tips that help any animal handler as well as a variety of individual pets. One of our clinic’s favorites is the use of treats to make a scary situation easier. Some dogs get scared to the point where they don’t want to eat, but for those who are willing, flooding them with positive interactions (food) to distract them from the needle or nail trim is much better.  We use a lot of peanut butter for dogs as well as meat baby food for cats. If your pet is on a specific diet, please let us know, and feel free to bring your own treats for this purpose.

Another of my favorite tips is to jog with the dog rather than pull them down the hallway. When you have forward momentum, a dog will be distracted and excited about where they’re going and forget they had put on the brakes for “THE BACK.”  And when we need to lower a dog from standing to lateral position, I love the technique that helps to slide the dog’s body down the holder’s front to maintain control rather than the flop that happens once the dog feet leave the surface.


There was so much information to gain that I can’t possibly put all 20 hours into a single blog post. However, I HIGHLY recommend looking into it further if you have an interest in the information, as well as if you have any further questions.
Comments? Questions? Reply to this post below! We would love to have your input on any and all of our posts.

When I was 21 years old, I fell in love. He was soooooo handsome. He had the sweetest face, a deep, soulful voice, and huge floppy ears.

His name was Roscoe. 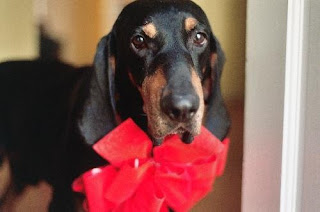 Roscoe crossed over the Rainbow Bridge several years ago, but in the short time that he spent with me, he taught me some very important lessons in dog ownership. I knew going into his adoption that I was taking on an elderly, arthritic dog who had been through a great deal of abuse and neglect. I expected that he would need extra care in the final years of his life. What I didn't know was that just weeks after his adoption, he would tear his cranial cruciate ligament.

Much like an ACL tear in their human counterparts, tearing of the CCL causes serious instability in the joint that leads to swelling, severe pain, sudden rear leg lameness, and eventual osteoarthritis. 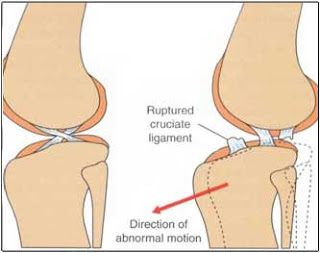 At 21 years old, I worked at a doggie daycare making close to minimum wage. I had no credit history to speak of, and my new addition was becoming very expensive very quickly. While I was ready to do whatever needed to be done (even if that meant putting myself in debt), his veterinarian did not heavily recommend surgical intervention initially due to his other conditions. Aside from surgery, his only option seemed to be constant rest and medication to reduce inflammation and pain. After a few weeks, it became clear that this was not going to be enough. 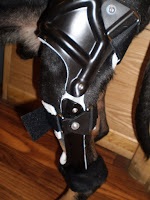 With no other options from that veterinarian and little veterinary knowledge myself, I set out to research what other owners had done in my shoes. After speaking to owners online and making a few calls to other area veterinarians, I discovered a company called OrthoPets that created custom orthotic and prosthetic devices for dogs and other animals. My veterinarian at the time had never heard of this company and was very skeptical, but they agreed to help me through the process of casting his leg, taking measurements, and sending away for his custom brace. 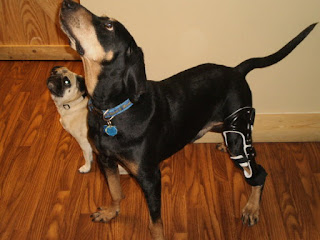 A little less than two weeks later, Roscoe was fitted with his new device. Almost instantly, his demeanor changed. He stood taller, walked more confidently, and seemed to be much less painful. While Roscoe did eventually become a good surgical candidate, I was so thankful that OrthoPets provided him with the support he needed until that time.

Shiloh Animal Hospital has fitted patients for braces through OrthoPets in the past, and we are happy to discuss this process and all other options with you should your pet need extra joint support.

Posted by Shiloh Animal Hospital at 7:39 AM 4 comments: