When we found out we were expecting our first child, my mind quickly went to my first two children--my dogs. How would they react to a baby? Would they learn to love him? Would he learn to love them? Many questions swirled around in my head about how to introduce this tiny human baby to my four-legged babies.


Daisy is our 9 year old English bulldog. She prefers the status of "only child." Darla is our 8 year old Siberian husky. She's our social butterfly. She wants everyone to be her friend. 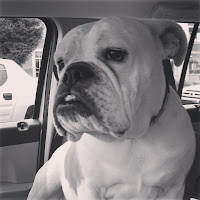 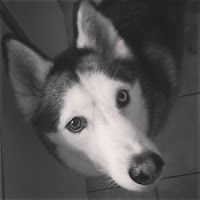 Having been in the animal medical field for 16 years, I knew a little something about introducing pets and children. We also read every article that we could find on the subject so that we could design a plan that would work for us. Not all situations are the same, but these general "dos and don'ts" got us through the first year without incident.

Things that we did: 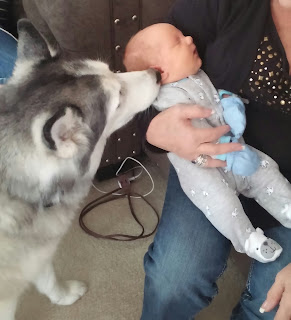 - First, we set up the nursery, let the dogs smell everything, and spent time with them in that room.
- After Wyatt was born, my husband brought home clothing/blankets that the baby wore in the hospital so that the dogs could smell him and get used to his scent.
- When we came home, we kept the dogs on leash (at first at a distance, then gradually closer) where they could see, hear, and smell Wyatt. 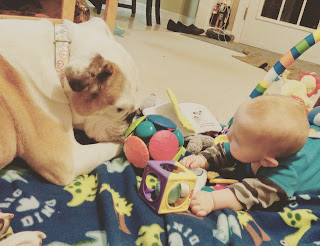 - We tried our best to keep the exact same routine that we had prior to having a baby (this was the hardest part), including one-on-one time with each dog.
- We set aside "time out" times for both the dogs and Wyatt. That way, everyone was able to have a little quiet, stress free time.

("Time out" for the girls consisted of a small amount of time in kennel w/ special, high value treat; the baby's "time out" consisted of time in his play pen [not a kennel!].) 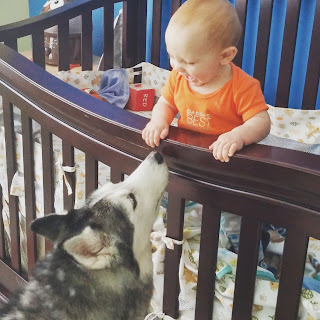 Wyatt is now ten months old, and so far, all is well. The girls are always near him when he is playing, napping, and (of course) when he is eating. It took a few walks to get the girls acclimated to walking alongside his stroller, but they are pros now. 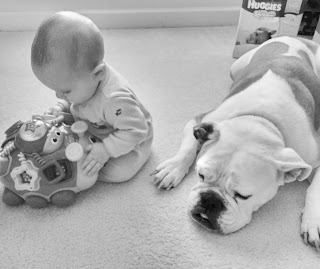 Things that we avoided:

- Feeding the dogs with the baby in the immediate area.
- Giving treats/chew toys when the baby was crawling nearby.
- Allowing the baby to mess with and potentially startle the dogs when they were sleeping.
- Feeding the baby meals or snacks on the floor (or any place where the girls had the potential to steal food or get jealous). 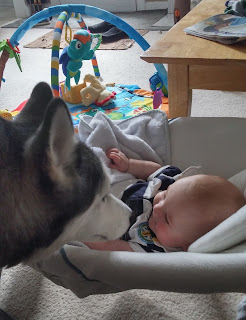 As Wyatt grows and learns, we find ourselves having to adjust our plan. Keep this in mind, and also know that there is no "one" way of doing an introduction. Do your research, and use your instincts. As always, be sure to call your veterinarian for advice. There are also animal behaviorists who can help with introduction if needed.

Posted by Shiloh Animal Hospital at 12:08 PM No comments:

After practicing medicine for fifteen years, what made me decide to “start all over again”?

Luckily, I have an active imagination and can visualize exactly how I wanted things to feel for the patients. A floor that isn’t cold and that their feet won’t slip on, a bench where they can sit next to their owners, a cozy hideout in the exam room for the cats, a variety of treats for cats and dogs, and a minimal amount of loud sounds and strong smells. 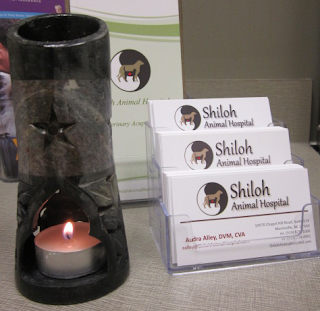 But it’s also about the people – warm colors, comfortable surroundings, and a clean atmosphere. The goal is for everyone to be comfortable and to minimize stress so that we can fully assess what might be going on with the patient and then be able to have a conversation about options.


I like options. I feel like my mission is to help educate people about what might be wrong and then to provide the options that are available to address the issue. Being able make educated decisions will lead to the best care for our patients. 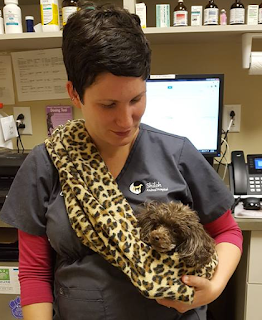 I also wanted to create a workplace that is consistent with the core values of the hospital. Honesty, empathy, curiosity, communication, accountability, teamwork, trust, and the golden rule are the guiding principles that help with decision making within the Shiloh team. We work hard to find team members who fit with our culture and who genuinely enjoy what they do and where they do it.

I wanted to have a cohesive team who could offer as many treatment modalities as possible to best suit our individual patients. Our three doctors have a combined thirty-six years of experience. Myself and Dr. Riddle are both certified veterinary acupuncturists, and Dr. Riddle is also a certified herbalist, practices massage techniques such as Tui Na, and will soon be providing food therapy. I recently obtained my canine/feline practice board certification, and I am currently training to be able to offer chiropractic care by December. Dr. Kleisch offers a welcome business perspective with his MBA in addition to his Western veterinary education. Together, we help each other to determine all possible treatment options and work together with our clients to provide the treatment or combination of treatments that we believe will provide an ideal quality of life for the patient.


Posted by Shiloh Animal Hospital at 5:14 AM 2 comments:

If you've reached this page, that means that you are curious about what goes on behind the scenes here at Shiloh Animal Hospital. Consider me your tour guide into the world of veterinary medicine.

My name is Heather, and if you haven't met me already, I am a technician at Shiloh Animal Hospital and the editor of this new blog. I "specialize in" (read: "am obsessed with") hounds and dachshunds, and I personally own and foster both. 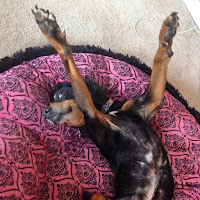 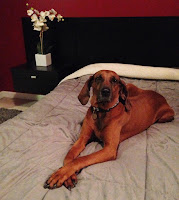 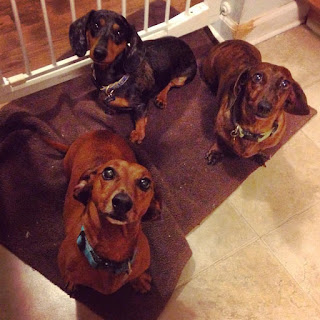 I also have a cockatiel, and we petsit often. Yes, my home is a zoo. Despite the extra cleaning and constant dog and bird song, I choose to surround myself with animals at all times. Being a tech and rescue mom isn't all playing with puppies and kittens to be sure, but the good moments will always overshadow the difficult ones for me.

Speaking of difficult moments, there are medical repercussions to owning certain breeds of dogs, and dachshunds are certainly no exception. Petey had his first dental cleaning with multiple teeth extracted at age one, even with daily brushing. Genetics most definitely play a role in dental problems, and small dog breeds are much more prone to this with a whole lot of teeth crammed into a tiny mouth. Stay on top of it early and often to avoid making that worse!

Unfortunately, dental disease is not the only issue that dachshunds commonly have. Does anyone want to wager a guess as to what surgery two of the three dachshunds pictured above had performed in the last year? (While disc surgery is very common in dachshunds,
Petey is so handsome that he went viral)

On my 28th birthday, Petey took a flying leap off of our bed as he so often did (right next to his set of ignored foam stairs), and he went about his morning as usual. I left the house to get lunch, and when I came home, he was walking around my kitchen with his back arched like a black cat on Halloween. 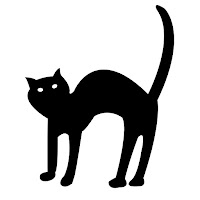 My heart sank. Knowing what I had seen a thousand times in other dachshunds, I ran my fingers down the sides of his spine. He screamed. I gave him anti-inflammatory medication, put him in his crate, and prayed for the best. He was still walking, so I had hope.

Because of their elongated spines, dachshunds are prone to a condition known as Intervetebral Disc Disease, or IVDD. Between each section of the spinal column, there are "discs" that act as buffers. Think of these like grapes. They take the brunt of impact so that movement is fluid and the bone is not directly affected. However, too much force can move these upward into the nerve that runs along the spine, and eventually they can rupture, causing the contents to ooze out with only the "peel" remaining.

My hope at that point was that his disc was just "bulging" (Stage 1), meaning that it had not yet herniated (Stage 2) or ruptured (Stage 3). With significant rest and the right medications, a bulging disc can be a temporary problem.

Unfortunately, Petey wasn't that lucky. By the evening, he was showing proprioceptive deficits. This is what that looks like: 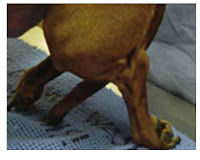 When a dog is standing up and you bend their paw backward on a flat surface with the pad facing up, they should immediately flip it forward into its normal position. When they don't, this tells us that communication between the nerves in the brain and the nerves in the affected back limb is delayed or severed, likely somewhere along that spinal nerve. Many dogs will eventually correct it or still be able to stand, and these dogs also typically have what we call "deep pain", meaning they can feel us pinching or applying pressure to those feet. Surgery is only an option if they are negative for deep pain, since spinal surgery on an unparalyzed dog comes with the risk of causing paralysis.

Petey had deep pain, so the surgeons at NC State Emergency did not want to proceed on Friday afternoon. I couldn't shake the sinking feeling that this was going to be a reality, so I asked to keep him there over the weekend...just in case.

On Saturday morning, not even twelve hours later, I received a call that he was fully paralyzed, they had already performed a CT scan identifying affected areas of the spine (three ruptured discs!), and surgery would proceed immediately. I waited on pins and needles until they finally called in the afternoon to let me know that he was in recovery and had done well.

Six whole weeks of strict crate rest and rehabilitation later, he was walking like a champ! Because our house is full of stairs and furniture, we've had to make a lot of adjustments. Our bedroom now has a "zen" themed mattress on the floor, we carry him up and down stairs both inside and outdoors, we use a harness that avoids spinal pressure for all leashed activities, and we keep a close hold on him when he's on the couch.

Another thing that was an amazing help during this time was the Assisi Loop. I could rave about this product forever, so I'll save it for another post, but in a nutshell, it is a non-invasive tool designed to reduce inflammation by stimulating a nitric oxide cascade in a targeted area. I own two of them, and if they ever decide to be publicly traded on the stock market, I know exactly where my money is going. 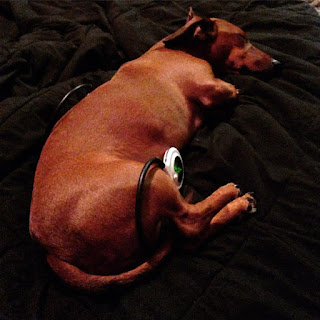 The moral of this story? Be prepared to take on breed related medical challenges with the dog that you choose to be your family member. All breeds are different, and they all come with their own sets of problems. Not sure what your breed's problems are? Research, research, research! We are at your disposal to help with that if you have questions. We can also DNA test mixed breed dogs to see what breeds make them up and identify genetic markers for diseases and conditions.

Posted by Shiloh Animal Hospital at 10:07 AM No comments: