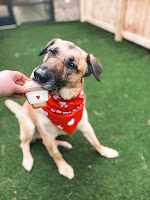 My whole life I have always loved dogs. I hounded my parents for years until they gave in and let us adopt a sweet little puppy from a broken down animal shelter in the middle of nowhere. When she unfortunately passed away from old age a little over a year ago, I knew I would not be able to be dog-less for long.

Like some sort of cosmic event, I had been looking at Kodiak’s picture on the rescue website for almost a year at that point. I was sure he would be snatched up quickly because he was so darn cute to me. Since I wasn’t in a place where I could adopt him at the moment (our family dog was very dog aggressive, which meant she ruled the roost her whole life) I hoped someone else would welcome him into their home in the meantime. 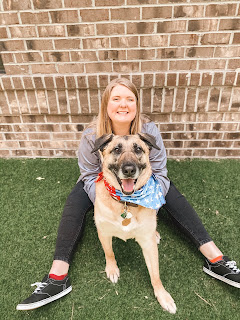 However, lo and behold, right when I was still aching from the loss of my childhood dog, Kodi’s picture swam back on my radar on PetFinder.com. I couldn’t believe that he was still up for adoption, considering he was a young dog, happy, and friendly looking. Regardless, I applied to four different rescues, trying to keep my options open but the rescue I adopted Kodiak from reached out first and seemed incredibly overjoyed to see interest in hi
m finally. We scheduled a meeting for the next weekend and it was love at first sight.

I learned quickly that the reason Kodi was up for adoption so long (3 YEARS!) was because he has some nervousness issues. Because of that the rescue had spent ages trying to get him adopted with little success. I was undaunted. Kodiak ran up to me immediately when I went to greet him, and I just knew it was going to have to be me to give him the chance to flourish like he has always been meant to.

I’ll be honest, Kodiak is not the easiest dog, he can take anywhere from ten minutes to an hour to warm up to people. He is not the immediately lovable dog that most people are overjoyed at meeting, he’s picky and likes to get to know people first before he graces them with his attention. He used to be averse to any dog coming up to him and would sometimes snarl or snap if they tried to sniff his mouth in a normal dog greeting. He didn’t know what beds, toys, stairs, cars—honestly, I could go on and on with the list of things I have now desensitized him to. 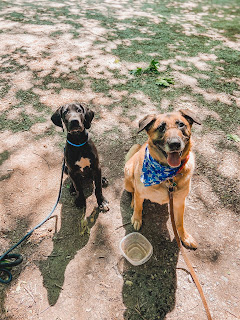 However, despite these initial flaws I wouldn’t change a second of the last year and a half that I brought Kodiak into my family. He came with me when I moved states, started new jobs, started graduate school, and is always there at my side to take on life. I have been shocked and amazed at the progress I have achieved over the last year. I have watched Kodi come out of his shell and trust in more people than just me for once. I have finally taken him to some dog parks and watched him run around and enjoy himself to his fullest recently. He wouldn’t even let my mom pet him when I first got him and would run away and growl and hide behind a table. Now, he still takes a little bit to warm back up to her but he is actively looking for pets and love. Kodiak rarely growls from nerves or fear anymore and seems overall more confident and happy as every day passes.

It hurts my heart to think that Kodiak sat in a rescue for three years before I happened upon him. I’ll be the first one to tell you that it hasn’t been easy working with a dog who was literally afraid of everything and would only trust me to do anything for him. However, if you have the ability to take that chance, to accept a work-in-progress dog into your life, please do. Kodiak has become the love of my family, friends, and people I have met. He is so caring and smart. The effort I have put into him has been resolutely paid back in kind and I know I cannot wait to see what the rest of life holds for him and us.

Posted by Shiloh Animal Hospital at 2:24 PM No comments: