Life is Like a Rescue Dog; You Never Know What You’re Going to Get ~ Ceara, Kennel Technician

As a child, the one thing that I would consistently ask for every birthday and Christmas was a dog. I dreamed of having a companion to take on long walks, play fetch with in the yard, and snuggle up with every night. Unfortunately, my dad was allergic to dogs, so I patiently waited eighteen years to move out so my dream could finally come true. I had a job working at a doggy daycare at the time and thought I knew everything there was to caring for a dog: socialization, vaccines, breed tendencies, training—the works. My boyfriend and I agreed that we wanted a shepherd mix given that he grew up with German Shepherds his whole life. We thought we were prepared in every way to get a dog…until we met Atilia. 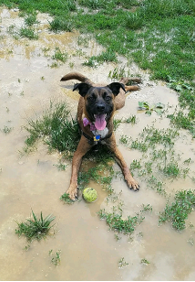 Atilia was advertised as a “German Shepherd mix” at our local rescue. She was reported as being six months old, which was the perfect age for us. It took us all of thirty seconds of meeting her to both agree that this was the dog for us. We filled out the paperwork, waited as she was spayed, and took her home four days later. The first week or so, she was perfect; she was gentle on the leash, she was friendly with the cat, and she never barked or chewed or scratched. The first day I took her to work with me, my boss exclaimed “that’s no German Shepherd; that’s a Malinois!” A Malinois? Although I had worked with many breeds, I was still early in my animal career and had never heard of a Belgian Malinois before. But after some research, I could see that she was practically identical to a Belgian Malinois besides her small stature and floppy ears. The many articles I read about Belgian Malinois all pretty much said the same thing: they are as loyal and smart as they are energetic and crazy. But since Atilia had been so calm and gentle, I didn’t think that she inherited those traits from whatever else she was mixed with. 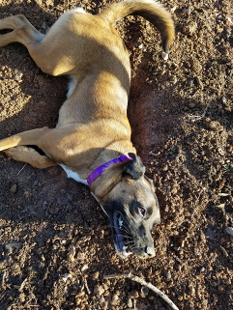 However, as Atilia became more comfortable with living with us, her true personality began to show. First the chewing started. Anything on the ground or counter tops like shoes, laptop cords, brushes, and sponges were all chewed up in a split second. I soon realized Malinois have the nickname “Maligator” for a reason. It seemed that no matter how much I walked or played with her, she was always ready for more. Training was a long and sometimes painful process; it seemed to be impossible to keep her attention. It was much more work than I had originally thought! I was increasingly jealous of my friends whose dogs could be taken for a thirty-minute walk and be tired for the rest of the day. But I was determined not to give up. I even began to change my own school and work schedule to give her as much stimulation and exercise as possible.

The biggest shock that came to us was when I took her to training one day, and our trainer made a surprising discovery. As he was attempting (and failing) to get Atilia’s attention by saying “look” and “here” over and over, he jokingly said “Achtung”, the German word for “attention”. Atilia’s ears perked right up, and she held his gaze without even blinking. Our trainer thought this was interesting and started going through all the German commands, and without fail, she responded to each of them. He got a huge smile on his face and said, “Your dog knows German!” What? Why in the world would she know German? He explained to us that there is a German training method called “Shutzhund” that’s mostly used for working dogs in the military or police. Apparently, at some point in Atilia’s early life, someone had taught her those commands. Once we started using the German commands with her instead of English, it was like training an entirely different dog! 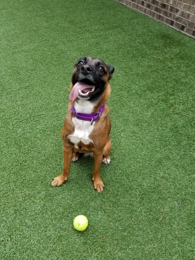 So here I am with my crazy, German speaking Malinois. She’s not the dog that I thought I adopted, but I wouldn’t trade her for the world. Atilia has come so far since we first got her, and the bond that we have formed has made us inseparable. The lesson that Atilia has taught me is that you can never truly prepare for what life throws at you, but you can always adapt, and sometimes it’s better than your original plan.


Posted by Shiloh Animal Hospital at 11:44 AM No comments: